A super congratulations to Alaina!!   The lead picture is Alaina on the summit of Denali.

Denali is the highest mountain peak in North America, with a summit elevation of 20,310 feet above sea level.  Denali is the third most prominent and third most isolated peak on Earth, after Mount Everest and Aconcagua.

Alaina, an ArmaSkin Ambassador, has a personal challenge to climb the Seven Summits.  She climbed Aconcagua in 2020.

In Alaina's words: "Summit! I feel really fortunate to have made it to the summit of Denali. It was a tough one but a good reminder that if you just put one foot in front of the other, you’ll get there!"

Alaina dedicated her climb to support @afghan_ascend which is an organization supporting women’s rights, education, and leadership training through climbing.

The next picture is Alaina giving her feet a breather on the descent, Happily sporting her ArmaSkin that had protected her on the entire trip. Erick the Catracho on the PCT.   OR NOT! This beautiful coast is not what Erick was expecting to see.

Erick, an ArmaSkin Ambassador, was well past the 1325 mile halfway point of his PCT adventure when Mother Nature stepped in!

Unfortunately, he has been forced to take a major detour via the Oregon Coast Trail.  This has been brought about by a series of closures ahead on the Pacific Crest Trail resulting from fires.

As Erick describes: "the fires are here, there's fires there!  Hikers are skittering in different directions like when the light is turned on in a room of cockroaches!"

So to be on the safe side and not risk his or the lives of others he has taken a lateral move to Brookings Oregon and then will again start heading North.

Despite the disappointment Erick is still positive and looking forward to reaching Canada.

It is sobering to recall that last year the same detour was forced on another of our favorite hikers, Meegana, who had to detour on her SOBO trip along the PCT. Jeremy is avid trail runner, ultra runner, Rogaining and orienteering enthusiast currently living in Turku, Finland where he teaches English at the University of Turku.

Born and raised in the Rocky Mountains (Idaho) in the USA, he has lived outside the USA for nearly 20 years in a few countries working as an educator (Middle East and Europe).

In recent years he has been representing Finland in international Rogaining events.  He was selected for Finland's team to compete in the satellite Big's Backyard Ultra competition in 2020 where he completed 31 loops (about 207 kilometers).

And before that (actually as we go to print)  he is participating for the first time in what is perhaps the most famous ultra trail race in the world, the UTMB (171 kilometers with 10,000 meters of climbing)

Earlier this year he and a Teammate won the open division of the Finnish championships in Sulkava Finland and got 6th place overall.  That was his first time as lead navigator.

We are looking forward to following Jeremy's journeys with ArmaSkin afoot! A shout out to adventure writer Leslie Hsuoh who continues to support ArmaSkin after first taking ArmaSkin to Antarctica.

In a recent article for Travel + Leisure, Leslie selected ArmaSkin for special mention among her sock options.

"Liners are designed to be worn underneath another pair of socks, and they don't get much better than the ArmaSkin Extreme Anti-Blister Crew Socks. They're made of Si Fusion fabric, which consists of a sticky hydrophobic silicone coating that's worn against the skin and a smooth hydrophilic fabric that masterfully reduces friction. Whether you're hiking in frosty Antarctica, during a Brazilian summer, or all seasons around Lake Tahoe, the ArmaSkin sock's friction-fighting power stops blisters in their tracks. The silicone is also bacteria resistant, which helps cut down on odors. The socks come in two lengths and two colors, and each is contoured for a specific foot, so make sure you have your left and right sides straight."

Michele is Magnetic in ArmaSkin Michele was kind enough to share her recent trip to Magnetic island with us.

"It was great to break out again after COVID lockdowns over the past 2 years. Here's me hiking on sunny Magnetic Island in July 2022. My trusty Armaskins always come along to ensure my feet are blister-free."

Colour on the Camino Alexander Verbeek, was super happy with his ArmaSkin after successfully covering the Camino de Santiago.

"Walking the Camino de Santiago brought me to Pamplona. Its history dates all the way back to its founding by the Romans in 74BC, when it was called Pompey after the military leader Gnaeus Pompeius Magnus. It was also once the capital of its own country, the Kingdom of Navarra. I was here five years ago and remember being fascinated by the many pilgrims, arriving dead tired, with a smile on their faces.
I spent a day in Pamplona, waiting to hear if it was possible to continue on the Camino with so many wildfires west of the city."

Luckily for Alexander the way was clear and he made it through including along this beautiful trail towards Belorado (above).

6 Skills You Need If You Love Hiking  (ArmaSkin blog) In this article, Kyt Lyn Walken describes the 6 skills that she believes hikers should build to enhance their ability to thrive in the outdoors.

We've noted that prices quoted on Amazon Australia for ArmaSkin are sometimes way above what you can purchase straight from the factory at www.armaskin.com

We believe in realistic pricing.   There's no need to pay over the top!

Stories from you, the happy wearers of ArmaSkin, are our most powerful learning and marketing tool. We thus encourage you to tell us about your experiences and adventures with ArmaSkin.

For your chance to win your choice of a pair of ArmaSkin liner socks simply email sales@armaskin.com a picture of you on the go using an ArmaSkin product together with a short comment about the picture.

If the picture is featured in an edition of ArmaSkin News the monthly prize is yours.

This month's winner is Michele who took ArmaSkin to Magnetic island.  Drop us a line ian@armaskin.com and we'll arrange your prize. 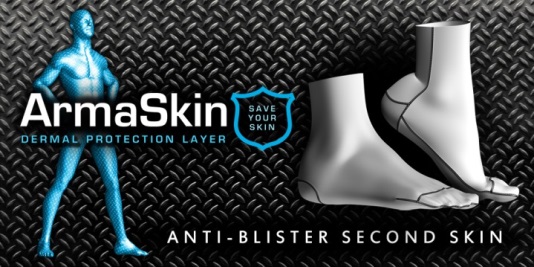